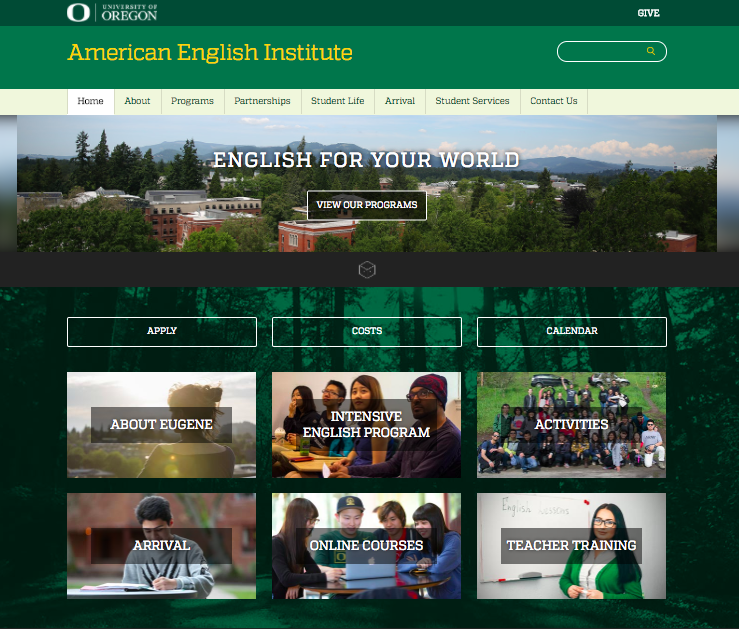 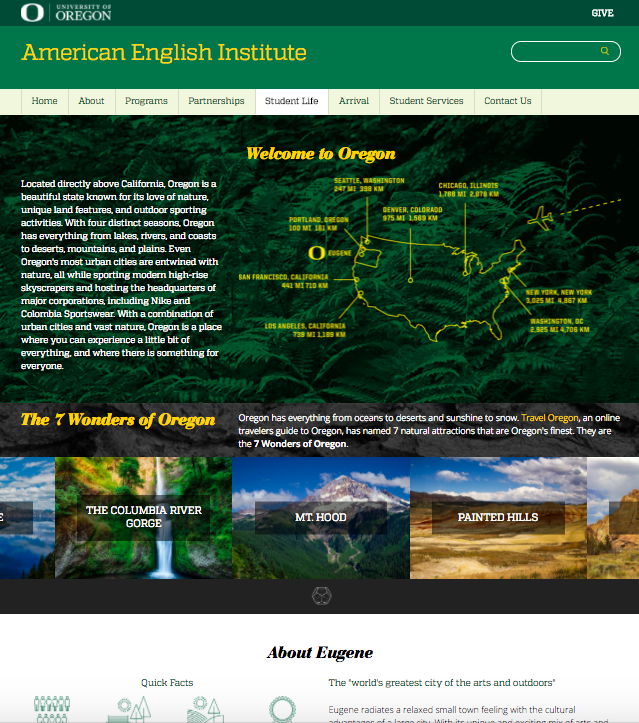 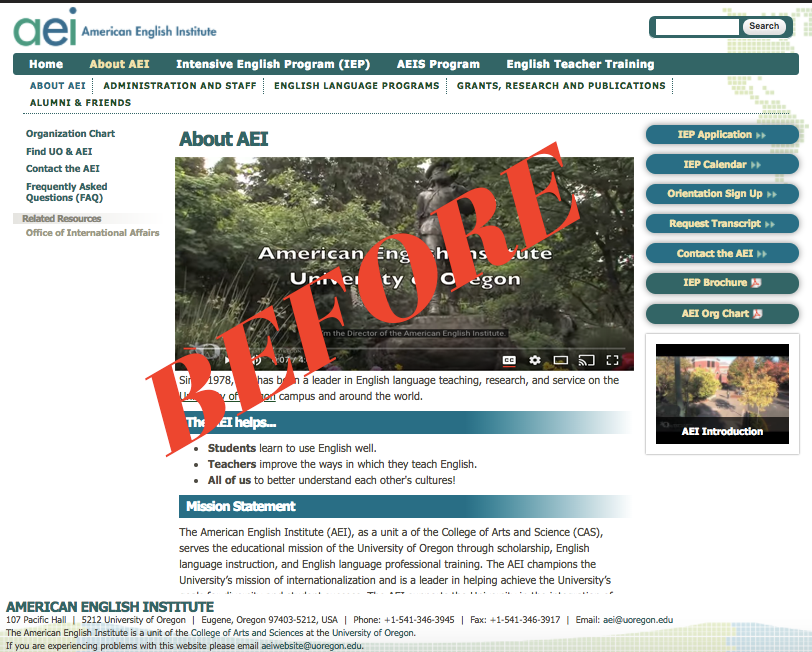 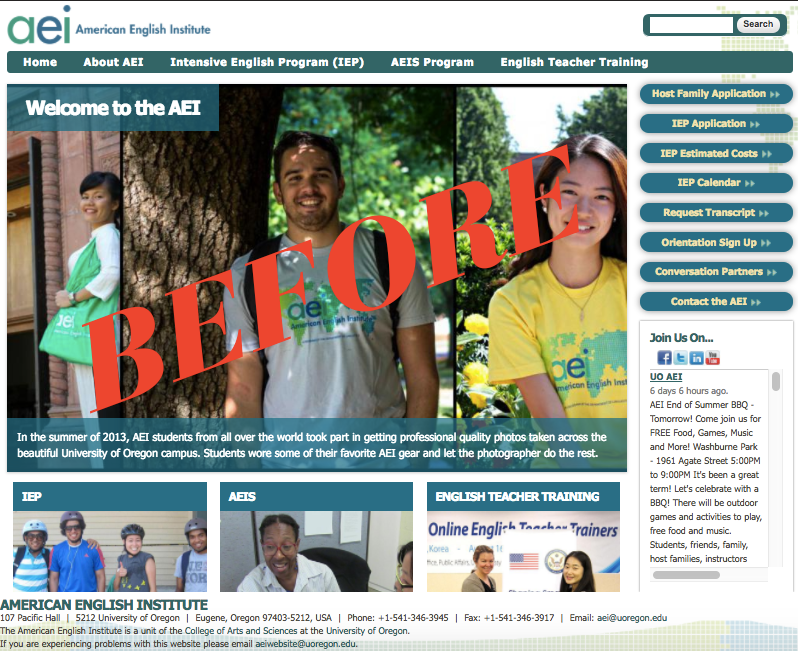 When I joined the AEI, one of my first steps was to arrange an informational meeting with staff members to learn what marketing challenges existed. Overwhelmingly, colleagues pinpointed the website as an area that needed to be improved. Although nearly all staff mentioned that we “needed a new website,” details on what exactly needed to be accomplished were scarce.

I met with the Executive director to build a shared vision around project planning, objectives, target audience, and content requirements. We also discussed measurable outcomes that would indicate a successful website for the AEI. In an effort to decrease potential roadblocks, I confirmed the stakeholders who needed to be involved in this project and their role within the team. I documented these details and recommended to the AEI Executive Committee that we both redesign the website visually to meet UO brand standards, and overhaul site content and structure.

My next step was to meet with UO IT to discuss the project and ask that they stage a new Drupal website on the centrally-hosted platform. In tandem with this meeting, I met with the UO Director of User Experience to better understand best practices for content organization and testing. I began to schedule one-on-one meetings with unit directors and their staff to dive deeper into what specifically, in their minds, could be improved in both their sections and for the website overall. I gathered and charted all existing web pages and began utilizing page templates to consolidate topics. Using software designed to test user experience, I then sent content testing exercises to staff, faculty, and students. After the basic structure was solidified, I then used HTML and CSS to build the pages within the website to enhance the overall look, feel, and flow while utilizing images, video, and icons to create a more visual experience for beginning English learners.

When the site was staged and drafted, I met with the AEI Executive Committee once again to gather feedback. After making adjustments to the site, I then sent the staged site URL back to staff, faculty, and students. Once the site had been tested by multiple user groups, we launched. After launch, I began referencing Google Analytics nearly hourly to ensure users were finding the information they needed and old pages were redirecting properly. I developed subsequent daily, weekly, and monthly reports for the AEI Executive Committee for review to track specific goals.

I believe this project was successful, while it also left room for improvement. The areas of greatest success were achieved in increased student inquiries and enhanced ease-of-use through content organization. Similarly, success was revealed in the positive feedback received from key stakeholders during the evaluation stage of the project.

The new website was intended to increase prospective student inquiries, applications, and enrollment, and to a large extent this was accomplished. While the re-design did increase prospective student inquiries by ~13%, and applications by ~8%, enrollment of direct applicants—those non-
degree seeking students that have not been conditionally admitted by the UO—remains a challenge. 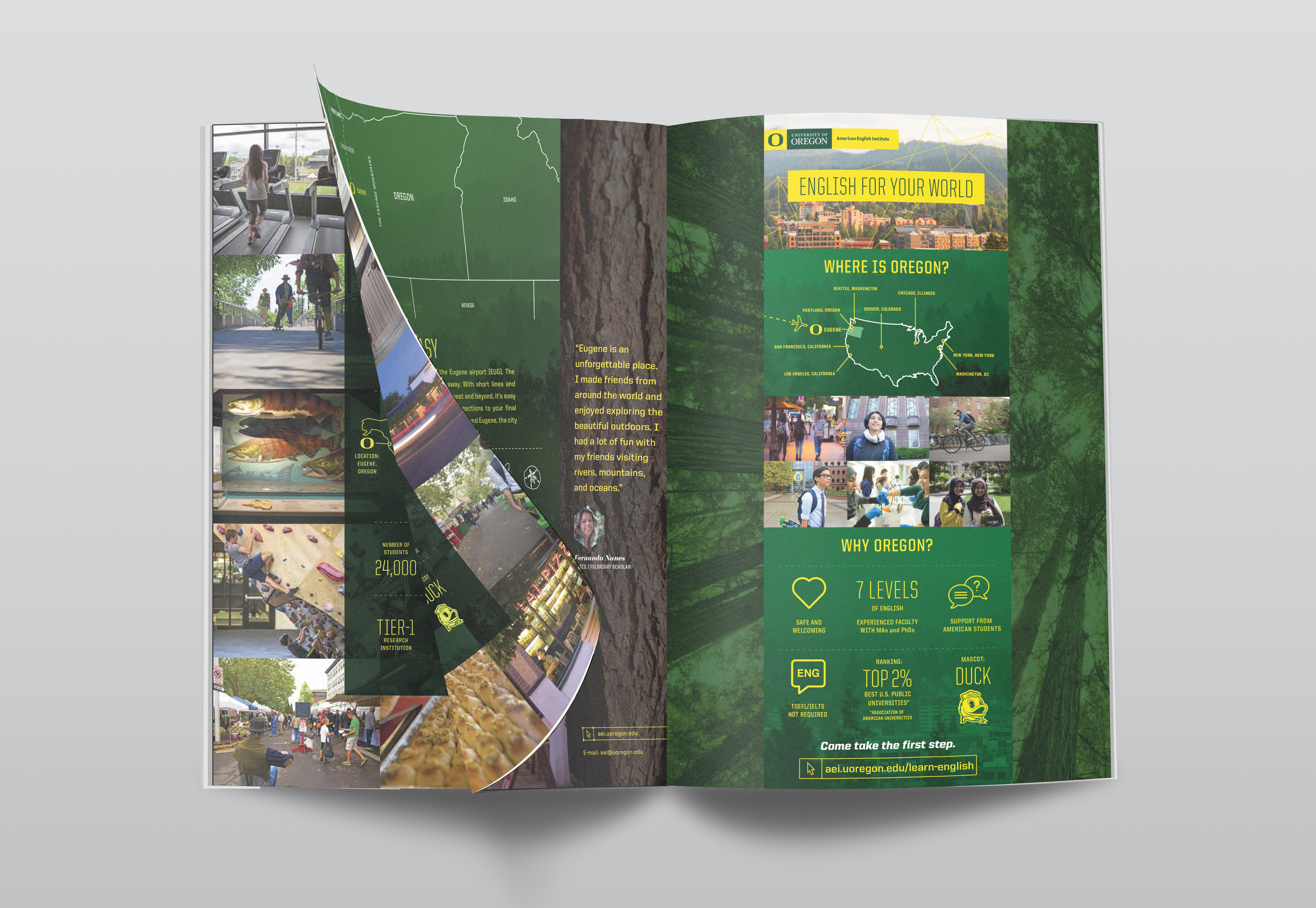